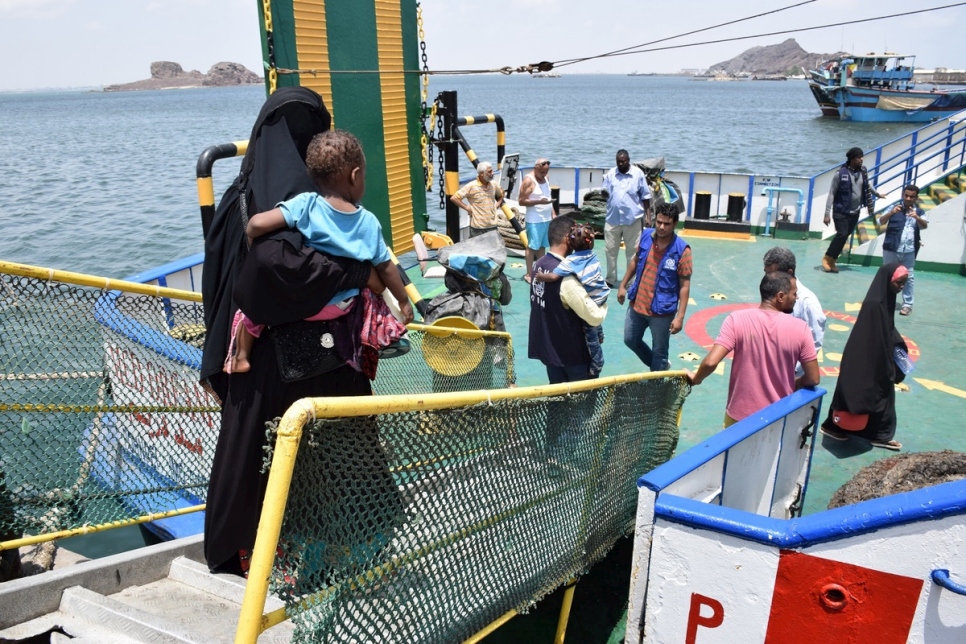 ADEN PORT, Yemen – For nearly a decade, Yemen was a place of refuge for Abaya Mursal and her family who had fled their homes in Somalia owing to conflict.

“We had a good life here in Yemen… I didn’t have any problems here,” recalled Abaya. “But since the conflict started, things became very difficult. This is why we decided to return home.”

Moments later, Abaya and her seven children boarded the boat that would transport them across the Gulf of Aden and back to Somalia.

With the war in Yemen now in its third year and the humanitarian situation deteriorating, civilians and refugees face life-threatening conditions there and many refugees have expressed their desire to return home. UNHCR, in partnership with the International Organization for Migration (IOM), is facilitating Assisted Spontaneous Returns (ASR) and has launched an appeal to facilitate returns for up to 10,000 Somali refugees.

Abaya was among 133 Somali refugees who were the first group to depart Yemen on Monday evening. The returnees left the Port of Aden on a vessel chartered for the ASR program. They were expected to arrive in Somalia’s Port of Berbera on Tuesday.“Fears for their safety and personal security are driving their return.”

Yemen has a long tradition of hosting those in need of international protection, but as the conflict drags on, UNHCR, Yemeni national authorities and humanitarian partners are facing significant challenges in ensuring adequate protection and assistance for refugees.

“Returnees, or those intending to return, have informed UNHCR staff that the prevailing situation in Yemen and fears for their safety and personal security are driving their return,” UNHCR spokesperson William Spindler told a news briefing in Geneva on Tuesday.

Somali refugees make up 91 per cent of the more than 280,000 refugees and asylum seekers registered in Yemen.

The irony of having to escape the very place where he sought safety is not lost on 50-year-old Somali refugee Ahmed Maewo Ali Mohammed, who was also among the first group of returnees departing from the Port of Aden yesterday.

“I came to this county in search of safety and now I am having to leave this country due to a lack of security,” he said.

The father of four came to Yemen in 2008 and stayed at the Kharaz refugee camp in Lahj governorate in Yemen’s south before moving to the Basateen district in Aden. Both Kharaz and Basateen are host to sizeable refugee communities. All of the returnees who departed last night had been living in one of the two locations.

Returning refugees are receiving assistance from UNHCR and its partners with documentation, transportation and financial support to facilitate the journey, as well as assistance to support their return and reintegration in Somalia. In addition to an initial cash grant, they will receive non-food items or cash equivalents, food vouchers and subsistence allowances.

Ahmed said he would return to Beledweyne in south-central Somalia where is wife’s family lives. “Our plan is to have a small vegetable garden to feed my family and sell some vegetables in the market.”

According to Spindler, most of the returnees have opted to go to the capital, Mogadishu, where “assistance and services will be more accessible and available”.

UNHCR has been present in Yemen for the past three decades, providing protection and services for refugees and asylum seekers. Its humanitarian operations continue to provide support to refugees who remain in the country.