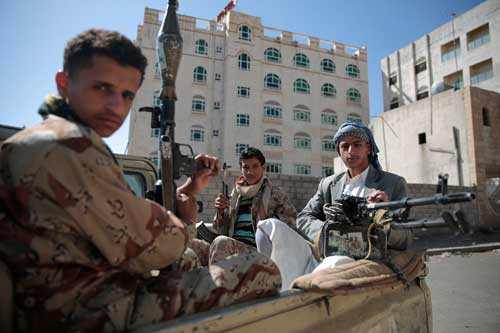 A journalist dies mysteriously in Yemen after receiving threats because of his work, and the resulting autopsy raises more questions than answers. A columnist in the same country is sentenced to death on espionage charges in an opaque trial.

CPJ is unable to determine in either case whether the journalist was deliberately targeted for his journalism. But the gravity of both cases, combined with the dearth of information and absence of any semblance of investigation or due process of law on the ground, highlights the treacherous and murky environment in which Yemeni journalists do their work.

Rocked by multiple insurgencies even before the ouster of former President Ali Abdullah Saleh in November 2011, Yemen descended into turmoil when forces of the Ansar Allah rebel movement, commonly known as the Houthis, completed their takeover of the capital Sanaa in January 2015 and forced the government of Saleh’s successor to flee to Aden in the country’s south. Since then, a Saudi Arabia-led bombing campaign targeting Houthi-controlled areas and the growing presence of Al-Qaeda in the Arabian Peninsula have increased the chaos, resulting in the total breakdown of state institutions.

Amid this backdrop, journalists have faced steadily mounting risks, particularly in areas controlled by the Houthis, where an atmosphere of intimidation prevails. CPJ has documented how journalists are attacked and threatened by unidentified assailants, as well as arrested or intimidated by individuals clearly affiliated with the Houthis. Rule of law is determined by whomever has seized power, and authorities in Sanaa and elsewhere lack either the infrastructure or the political will (or both) to conduct investigations in an impartial manner.

On April 12, a state security court in Sanaa controlled by the Houthis sentenced longtime journalist Yahya al-Jubaihi to death, according to several media reports. The state-run Saba News Agency, also controlled by the Houthis, reported that al-Jubaihi was convicted of spying for Saudi Arabia and of passing information to Saudi diplomats that “posed harm to Yemen’s army, political position and economy in return for 4,500 Saudi riyal (US$1200) from Riyadh since 2010.” Meanwhile, Qatar’s state-funded broadcaster Al-Jazeera reported, without citing sources, that the Houthis detained the journalist after he refused to write an article supporting the Houthis. Qatar is among the countries participating in the Saudi-led military campaign against the Houthis and forces loyal to Saleh.

In a statement emailed to CPJ, the Studies and Economic Media Center, a human rights organization in Sanaa, said al-Jubaihi had worked for the Saudi newspapers Al-Madina and Okaz in the 1980s, and that he had also lectured at Sanaa University. Okaz and Al-Madina both reported his sentence, though neither article identified him as a former reporter. According to Al-Jazeera, Al-Jubaihi also worked first in the northern Yemeni government’s media department from 1987-1990, under former Saleh, and continued in that role after North and South Yemen unified under Saleh’s rule in 1990, leaving the post in 1997. More recently, Al-Jubaihi wrote columns criticizing the Houthis. The Media Freedom Observatory, a project of the Studies and Economic Media Center, told CPJ in an emailed statement that al-Jubaihi was also a media adviser at the Saudi Embassy in Sanaa at the time of his arrest.

The judicial process that handed down Jubaihi’s death sentence was opaque, taking place in a closed-door court usually reserved by the Houthis for Al-Qaeda militants, according to a report in the New Arab. Al-Jubaihi’s daughter, Bushra al-Jubaihi, told the Yemeni TV channel Belqis in an interview that her father was not allowed regular access to a lawyer during the trial. In a separate interview with the same channel, she said that the family had filed an appeal.

The mysterious recent death of Yemeni investigative journalist Mohammed al-Absi is another potential illustration of the turmoil in Yemen. Al-Absi, a blogger and investigative journalist who had previously been threatened and faced legal action for his reporting, died unexpectedly December 20, 2016. Members of his family told CPJ they suspected murder and delayed the burial in order to have an autopsy conducted abroad.

Ashraf al-Rifi, secretary of the Yemeni Journalists’ Syndicate’s Rights and Freedoms Committee, told CPJ that he took tissue samples from al-Absi’s remains to forensic doctors in Jordan because Sanaa lacked the proper facilities to perform a full autopsy. The syndicate put out a joint statement with the family detailing the measures they took to transport tissue samples to Jordan via Aden, which is under the control of loyalists to Abdu Rabu Mansour Hadi, Saleh’s successor. Results from the autopsy indicated his death was due to carbon monoxide poisoning, but did not clarify how he was exposed.

A member of al-Absi’s family, who asked not to be named for fear of retribution, told CPJ they called on Houthi authorities for an in-depth investigation, but have not received a response. They said they have reason to be suspicious: al-Absi had been threatened repeatedly for his work. He was targeted with a criminal defamation lawsuit in 2013 by Hadi’s government when he was the editor of the newspaper al-Oula. The suit, later dismissed, was in response to articles the newspaper ran alleging financial mismanagement at a government-run charity, following up on a series of blog posts that Absi wrote independently.

After the Houthis seized Sanaa, Al-Absi switched his focus and penned a series of blog posts reporting on what he said was rampant corruption involving prominent businessmen and senior Houthi leadership. He also covered issues such as the deterioration of Yemen’s infrastructure in regional publications including Lebanon’s As-Safir. Shortly after his unexpected death, his colleagues told CPJ that al-Absi told them recently he had been threatened by militias and feared for his life.

By the time Al-Absi died, the idea of a Yemeni journalist being targeted by a government lawsuit seems almost quaint. The Yemeni state has effectively ceased to function, and the authoritarian state apparatus that muzzled journalists in the past has been replaced by a dizzying array of armed groups.

The atmosphere of intimidation is such that even carrying equipment such as cameras in Sanaa is a risky endeavor, one journalist, speaking on condition of anonymity, told CPJ, adding that while he walked with a colleague in Sanaa recently a group of Houthi forces accosted them at the sight of their cameras, saying they would “smash their heads” if the two colleagues were journalists. The journalist said that colleagues in Houthi-controlled areas work furtively, especially if they require noticeable photo or video equipment, and that while reporting a recent video feature the crew filmed all outdoor scenes using mobile phones and left the scene quickly.

Additionally, the journalist said, all journalists working in Houthi-controlled areas need a license to work, even while covering everyday events such as weddings. Those working without licenses risk arrest including from militias affiliated with Houthis but not officially part of them.