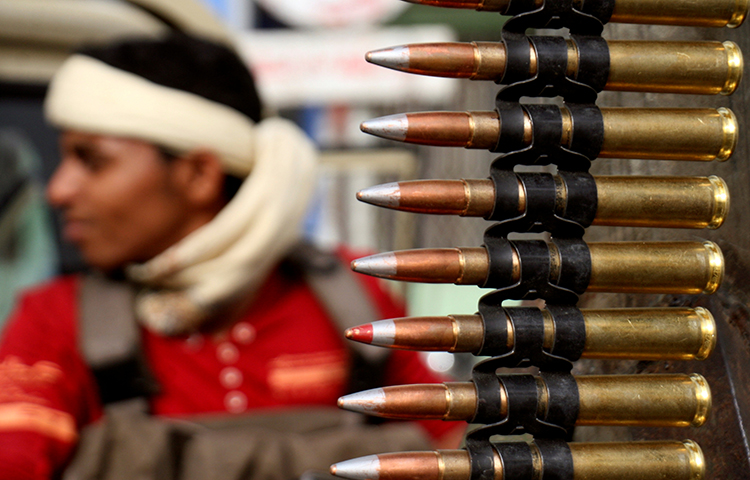 New York, January 22, 2018–The Committee to Protect Journalists condemns the killing of Yemeni photographer Mohammad al-Qadasi in a missile strike allegedly by the Ansar Allah movement. Al-Qadasi, who worked for the privately owned Belqees TV station, was killed today in the Khayami area of Taiz governorate while on assignment, the channel’s director general Ahmed al-Zurqa told CPJ.

According to the director, Al-Qadasi was photographing a special forces graduation ceremony near the village of al-Khayami and went to investigate a nearby recent missile strike Al-Zurqa said was fired at approximately 11 a.m. by the Ansar Allah group, commonly known as the Houthis.

Al-Qadasi’s colleague, Fawaz al-Hamadi, reported on Belqees TV that he and al-Qadasi heard the blast from the first missile strikes and went to investigate the scene. While en route on their motorcycles, a missile landed next to al-Qadasi and shrapnel from the explosion hit him in the head and chest, according to al-Hamadi. Al-Hamadi said he rushed al-Qadasi to the nearby Khalifa Hospital where the photographer died.

“Mohammad Al-Qadasi’s death is a reminder that journalists covering the conflict in Yemen do so at risk of paying the highest possible price,” CPJ Middle East and North Africa Program Coordinator Sherif Mansour said from Washington, D.C.

CPJ contacted Ansar Allah spokesperson Muhammad Abdalsalam via email and WhatsApp, but did not receive an immediate response.

Belqees TV later reported that the Houthis fired five missiles at the special forces graduation and the nearby village.

Al-Zurqa told CPJ that Russia Today Arabia reporter Basheer Aqlan was injured in the same attack and remains in a coma at Khalifa Hospital with shrapnel injuries to his head and neck. Russia Today’s press office did not immediately respond to CPJ’s email requesting more information.

Al-Zurqa added that Al-Qadasi worked for Belqees TV for a year and a half in the Taiz governorate.

At least two journalists were killed in Yemen last year, both in the city of Taiz, with sources alleging that Houthi fighters fired a shell at the building where they were taking cover. The Houthis, which control the Yemeni capital of Sanaa as well as broad swathes of the country’s north and west, continue to detain at least 13 journalists and in December 2016 stormed the Sanaa offices of the Yemen Today TV channel, holding at least 40 of the channel’s employees inside the building for more than a week.