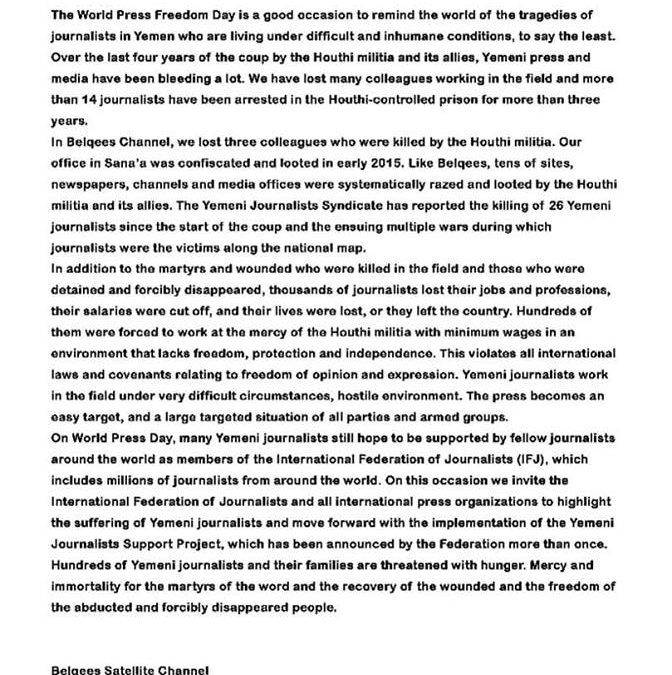 The World Press Freedom Day is a good occasion to remind the world of the tragedies of journalists in Yemen who are living under difficult and inhumane conditions, to say the least. Over the last four years of the coup by the Houthi militia and its allies, Yemeni press and media have been bleeding a lot. We have lost many colleagues working in the field and more than 14 journalists have been arrested in the Houthi-controlled prison for more than three years.
In Belqees Channel, we lost three colleagues who were killed by the Houthi militia. Our office in Sana’a was confiscated and looted in early 2015. Like Belqees, tens of sites, newspapers, channels and media offices were systematically razed and looted by the Houthi militia and its allies. The Yemeni Journalists Syndicate has reported the killing of 26 Yemeni journalists since the start of the coup and the ensuing multiple wars during which journalists were the victims along the national map.
In addition to the martyrs and wounded who were killed in the field and those who were detained and forcibly disappeared, thousands of journalists lost their jobs and professions, their salaries were cut off, and their lives were lost, or they left the country. Hundreds of them were forced to work at the mercy of the Houthi militia with minimum wages in an environment that lacks freedom, protection and independence. This violates all international laws and covenants relating to freedom of opinion and expression. Yemeni journalists work in the field under very difficult circumstances, hostile environment. The press becomes an easy target, and a large targeted situation of all parties and armed groups.
On World Press Day, many Yemeni journalists still hope to be supported by fellow journalists around the world as members of the International Federation of Journalists (IFJ), which includes millions of journalists from around the world. On this occasion we invite the International Federation of Journalists and all international press organizations to highlight the suffering of Yemeni journalists and move forward with the implementation of the Yemeni Journalists Support Project, which has been announced by the Federation more than once. Hundreds of Yemeni journalists and their families are threatened with hunger. Mercy and immortality for the martyrs of the word and the recovery of the wounded and the freedom of the abducted and forcibly disappeared people.
Belqees Satellite Channel
The World Press Freedom Day
3 May 2018