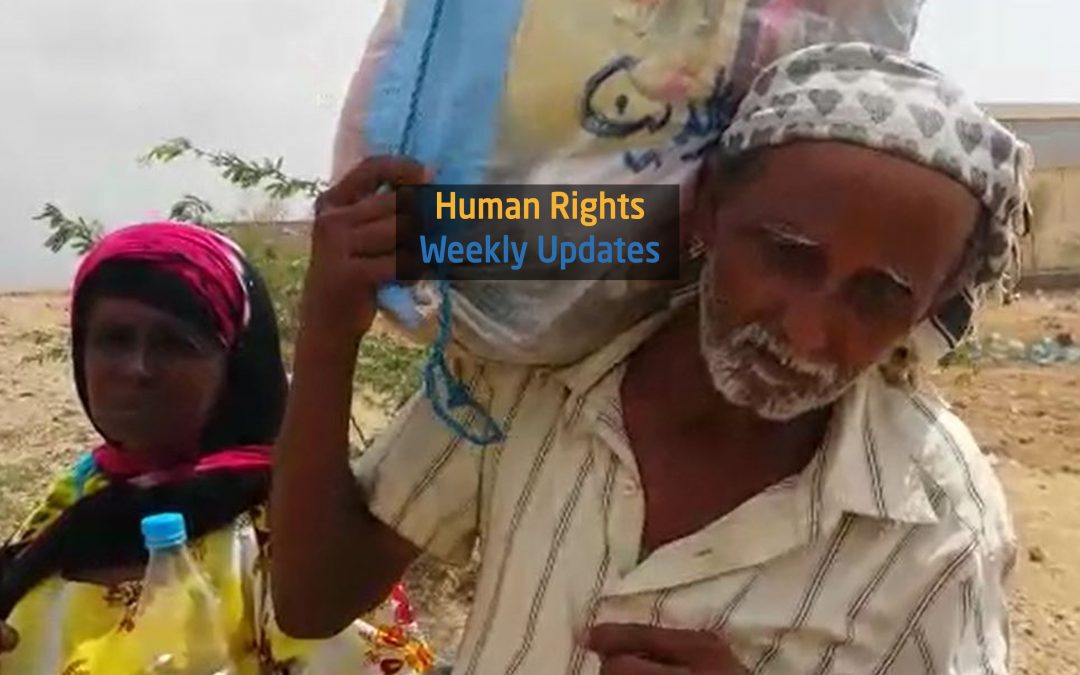 (4 June, 2019), The Minister of Fisheries ordered the formation of a committee to study the phenomenon of mass shrimp deaths, which have spread along al-Siteen coasts in al-Mukalla city.

(5 June, 2019), A woman was killed in the explosion of a landmine while she was herding sheep in al-Sawma’ah district in al-Baydha governorate.

(6 June, 2019), A woman was killed and three civilians injured in artillery shelling by the Houthi group at a village in al-Dale governorate.

(7 June, 2019), Houthi group criminalizes anyone celebrating Eid on Tuesday, the day on which Saudi Arabia celebrates, in areas under their control and arrested dozens of people in Sana’a and Ibb governorates.

(7 June, 2019), Civilians in Abyan unable to buy essential supplies and clothes for Eid and accuse the traders of doubling the prices due to Eid season.

(8 June, 2019), A displaced blind man recounted to Belqees TV his tough journey of displacement. He walked for 3 days carrying his big plastic bag on his back, “I don’t have a Riyal in my pocket, nor I have sons or relatives to support me. I have nothing in this life except Allah who is my supporter.”

(9 June, 2019), At least five civilians were killed and others injured while they were praying in a mosque in an armed attack in al-Dale governorate.

(9 June, 2019), Human Rights Office announced that 16 children were killed and injured as a result of Houthi group shelling and firing during the first three days of Eid in Taiz city. The office said the Houthi group continue targeting civilian neighborhoods in the city.

(9 June, 2019), A woman was killed and another injured by a bullet fired by a Houthi sniper in Taiz governorate.

(10  June, 2019), On the occasion of Yemeni Journalist Day, a number of journalists in Marib governorate gathered to stand in solidarity with the kidnapped journalists in Houthi prisons.

(10  June, 2019), A 12-year old girl was killed a bullet fired by the Houthi group in the area of the old airport, west of Taiz governorate