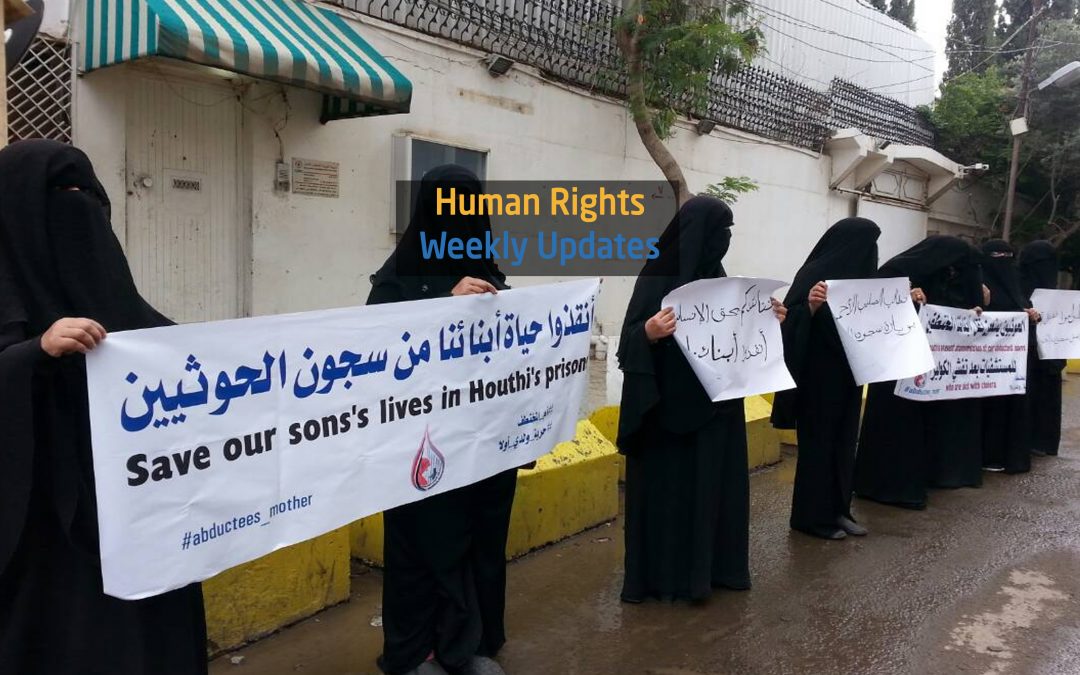 (15, October, 2019), 3 detainees in al-Thawra prison in Sana’a have started a hunger strike, protesting the unhealthy conditions and demanding to be released. The detainees, Nayef al-Marousi, Mazen al-Mahamadi and Badr al-Mulaiki, have been held for the past four years without a charge against them.

(15, October, 2019), The Association of Abductees’ Mothers appealed to the ICRC and the UN to support the families of the victims to receive the crops of their sons, who were targeted by the Saudi-coalition and are held in a college-turned-detention center in Dhamar.

(18, October, 2019), The lives of the displaced people has worsened in  Lahj governorate as a result of the lack of drinking water, shelter, and shortage of food. The IDPs demanded the responsible authority and the donors to support them and reduce their suffering but they have not responded.

(18, October, 2019), The Association of Abductees’ Mothers said that the Houthi group forced 400 abductees in the central prison in Sana’a to wear air force uniforms and move them to Special Security Forces camp in al-Sabaeen area.

(19, October, 2019), Medical sources said that al-Razi hospital in Abyan governorate has been receiving about 25 cases of cholera every day.

(19, October, 2019), Right to Live organization revealed that more than 3,000 children are deprived of education in al-Jawf governorate as a result of a lack of schools and population density.

(21, October, 2019), Dozens of civilians complained that they are unable to obtain passports. The pictures showed dozens of women and children queuing till late at night near the Immigration and Passports Department in Marib governorate, preferring to wait in the streets because hotels are expensive.

(21, October, 2019), Local sources said a civilian was shot by anonymous armed men in the interim capital of Aden